High-Tech Sensors and Blockchain: New Avenues Towards Elimination of Rabies

Rabies continues to kill approximately 60,000 people every year, mainly in Africa and Asia. In order to reach the goal to eliminate dog-mediated human rabies worldwide by 2030, integrated strategies, political will and innovations are needed. Swiss TPH is at the forefront of rabies research; from devising high-tech sensors to track dogs in urban settings and employing new mathematical methodologies to investigating blockchain for improved access to post-exposure prophylaxis. 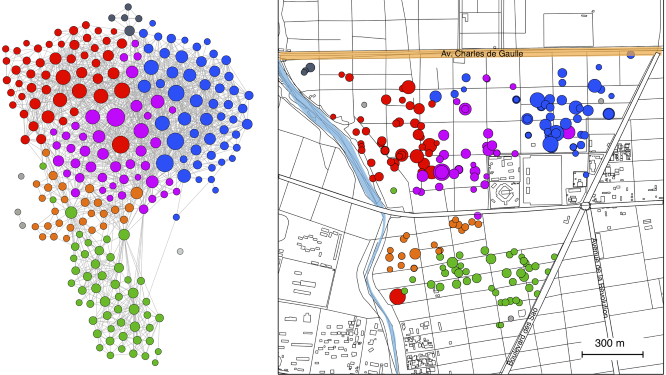 Network of a dog population in a selected neighbourhood of N'Djamena. In the left panel, each node corresponds to a dog. In the right panel, each dot on the map corresponds to a home location of a dog. The colours correspond to the community in the network. The maps were generated using OpenStreetMap contributors.

Rabies is an infectious viral disease that is nearly always fatal once the virus has reached the brain of the infected person. Rabies is a zoonotic disease, meaning that the virus is transmitted from animals to humans. Ninety-nine percent of human deaths are caused by transmission of the virus by dog bites. Rabies could be fully prevented given the availability of highly efficacious vaccines and human post-exposure prophylaxis (PEP). In large parts of Europe, rabies has been eliminated over the past three decades thanks to massive oral vaccination programmes of wild animals.

The global economic cost burden of dog-mediated rabies is estimated at USD 8.6 billion according to the World Health Organization (WHO). Major costs associated with dog-mediated rabies include loss in productivity due to premature death, cost of PEP and direct costs to the medical sector and bite victims.

Studies conducted by Swiss TPH have shown that within 10 years, the cumulative cost of mass vaccination of dogs is lower than the cumulative cost of human PEP. According to Jakob Zinsstag, Head of the Human and Animal Health unit at Swiss TPH: “Well-coordinated long-term regional efforts in dog mass vaccination could lead to the elimination of dog rabies at significantly lower cost than the sustained provision of human PEP prophylaxis."

Indeed, studies have shown that it is feasible to eliminate dog-mediated rabies. Yet, is it necessary to mass-vaccinate all dogs in a certain setting, a mission that is costly and nearly impossible? Not necessarily, according to a study published by Swiss TPH last year. The scientists investigated how dogs in a certain neighbourhood are connected with each other and thus how likely they are to transmit rabies and cause an outbreak.

“Statistical sampling from a network is challenging: what if the most interconnected dog is not part of the sample? Hence, to project the potential transmission of a disease, we have to understand the network of those who can transmit it,” said Mirjam Laager, who pursued her PhD at Swiss TPH supervised by Nakul Chitnis and now does her post-doctoral work at the University of Oxford. “To do so, we need to analyse all actual social interactions of all members in the network.” The method Laager and her colleagues applied is called percolation theory and stems originally from physics.

In practice, this meant tracking the location and contacts of 328 dogs in different neighbourhoods of N'Djamena, the capital of Chad, with newly developed geo-located contact sensors. “We not only wanted to establish a contact network for each dog, but also to track the exact position of where dogs meet,” said Céline Mbilo, PhD student at Swiss TPH. To develop contact sensors which can also track global positioning system (GPS) data, the scientists worked with Bonsai Systems, a spin-off company of the ETH Zurich. The geo-sensor cages were produced using a novel 3D printer. The development of this new technology was funded by an R'Equip grant of the Swiss National Science Foundation.

“We equipped all domestic dogs in the area of one square kilometre in three neighbourhoods of N’Djamena characterised by high, medium and low dog density with the geo-sensors,” said Mbilo. “We then tracked all activities and contacts of the dogs over a four-day period.” Results demonstrated considerable heterogeneity among dogs: while most had only little contact with other dogs, a few were highly interconnected.

“A next step in the analysis of our data is to find out whether highly connected or active dogs share similar characteristics such as sex or neutering status which could favour a more targeted vaccination approach of such highly social dogs,” said Mbilo. “Furthermore, we would like to find out whether there are specific meeting hotspots for dogs such as meat markets or waste dumps.”

With the mathematical model, the researchers were able to demonstrate that major rabies outbreaks could be prevented when the WHO-recommended dog vaccination coverage of 70% is achieved. However, a coverage of 70% seems not to be sufficient to prevent minor outbreaks. “Our results suggest that endemic rabies in N’Djamena may be explained by importation of rabies-exposed dogs into N’Djamena from outside the city,” said Mbilo. This finding is further corroborated through an elegant phylodynamic analysis of rabies virus strains from N’Djamena. “Humans may play an important role in the transmission of dog rabies when migrating or travelling together with their dogs,” according to Mbilo.

Apart from preventing transmission from dogs to humans, human deaths can also be averted through improved access to quality PEP when a person is bitten. “On the one hand, supply chains are often inadequate in health systems. On the other, hand there is often insufficient communication between public and animal health services,” said Zinsstag. To address this issue, Swiss TPH scientists aim to test the potential of the use of a blockchain approach, coupled with an algorithm to ensure better access to PEP.

“The blockchain technology would help control the communication flow between local health providers and health and veterinary authorities,” said Zinsstag. Furthermore, electronic health records of patients may contribute to improve patient compliance, secure patient access to free PEP and assure the vaccine supply chain as a whole within the investment strategy of Gavi, The Vaccine Alliance.