Marcel Tanner is one of the most distinguished health experts in Switzerland. His contributions in the fields of global health, infection biology and malaria research and the strengthening of health systems, especially in Africa and Asia, have made him known also internationally. At the Dies academicus on 25 April 2020, the University of Zurich awarded him with an honorary doctorate. 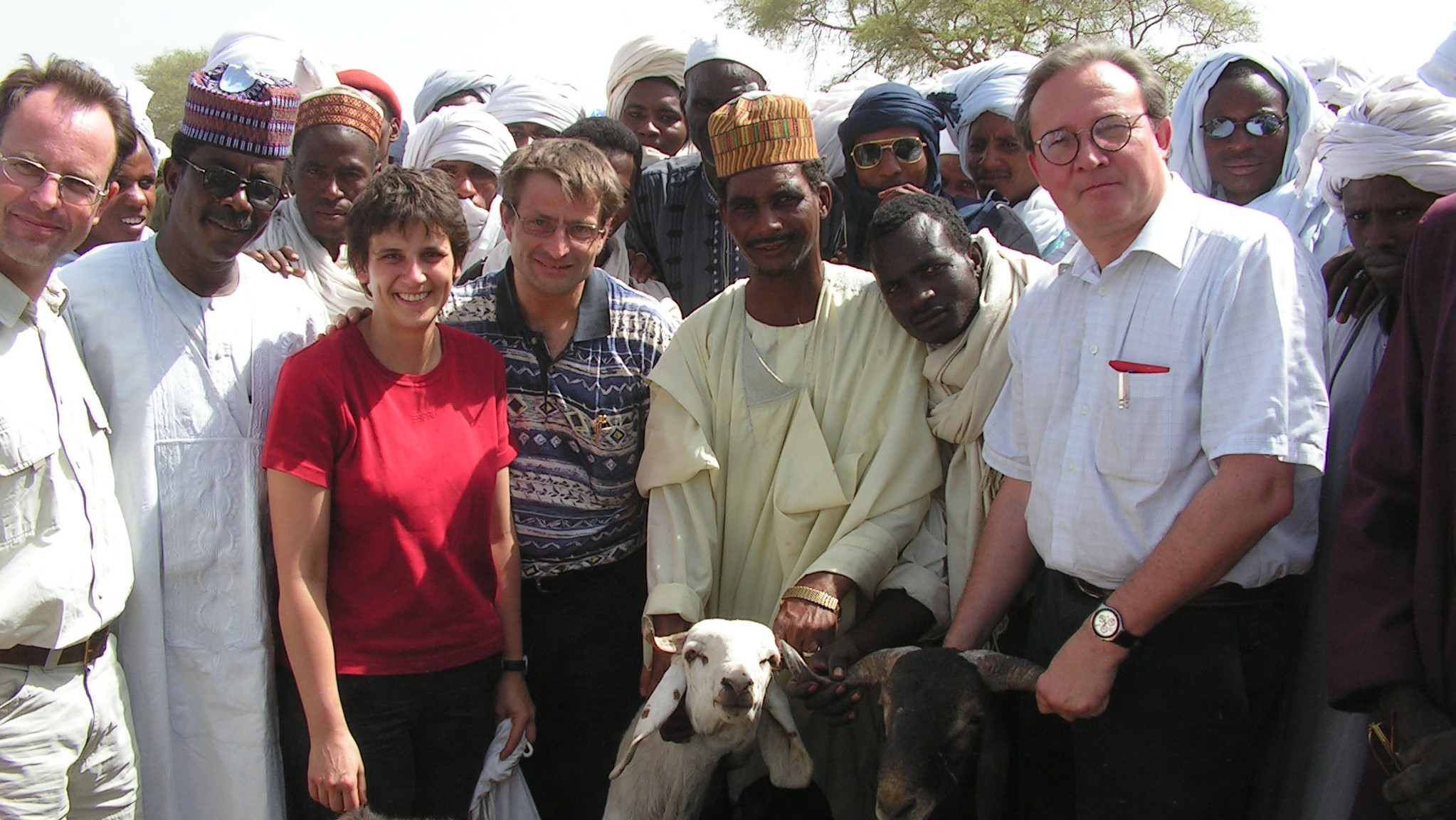 Together with Jakob Zinsstag and his team Marcel Tanner established joint vaccination services for people and cattle among the mobile pastoralists in the Sahel zone in Central African Chad. (Photo: Jakob Zinsstag, Swiss TPH)

Great honour for Marcel Tanner: The Vetsuisse Faculty of the University of Zurich is awarding an honorary doctorate to the President of the R. Geigy Foundation and President of the Swiss Academies as well as the Director emeritus of the Swiss Tropical and Public Health Institute (Swiss TPH) in recognition of his commitment to human and animal health ("One Health"), especially in countries of the global South. "In his role as Director of the Swiss TPH and in other central functions, Marcel Tanner made a significant contribution to the combination of human and veterinary medicine with the further development of the One Health concept - which also led to a noticeable improvement in the health of the poorest populations in developing and emerging countries in particular", says Roger Stephan, Dean of the Vetsuisse Faculty, in his laudation.

Human and animal health ("One Health")

The global SARS-CoV-2 pandemic has made it clear and painful: human and animal health are closely intertwined. Over half of all infectious diseases are zoonotic, i.e. they spread from animals to humans (or vice versa). In order to minimise this risk, inter- and transdisciplinary approaches such as "One Health" are needed, which links the health of humans and animals. Already in the 1990s, Marcel Tanner worked with Jakob Zinsstag and his team under this premise. In Central African Chad they established joint vaccination services for people and cattle among the mobile pastoralists in the Sahel zone. "One Health is a supply process that not only leads to the well-being of people and animals and thus to sustainable ecosystems, but also proves to be extremely cost-effective in the long term," says Tanner.

From inter- to transdisciplinarity

A simultaneous consideration of human and veterinary medicine forces one to anchor research and implementation programmes within the ecological, social and health systems of the countries of the South. This requires not only research partnership based on mutual trust, but also new scientific approaches. For example, transdisciplinary approaches that take into account the knowledge of the local population in solving social problems. Marcel Tanner has also championed transdisciplinarity as President of the Academies. A recent example is TD-MOOC, the world's first online course on transdisciplinary research, which can also be integrated into existing courses, lectures and seminars.

"The SARS-CoV-2 pandemic in particular clearly shows how important inter- and transdisciplinary cooperation between different disciplines, institutions and decision-makers across all borders is," says Marcel Tanner. As a member of the Advisory Board of the scientific National COVID-19 Science Task Force, he advises the Confederation on its measures to cope with the crisis. "I am delighted to receive this great distinction from the Vetsuisse Faculty of the University of Zurich, but it is not individual achievements that count, but rather joint action and mutual learning that will take us forward".

Studied biology, chemistry and medical microbiology/immunology at the University of Basel. Dissertation in medical zoology on African sleeping sickness. His fascination with the pathogens of tropical diseases brought him to many places in Africa: to Cameroon and Liberia (1979), and later to Tanzania (1981-1984), where he became head of the then field laboratory of the Swiss Tropical Institute. Working with and among the local people opened his eyes to the fact that a purely biological understanding of diseases and their pathogens was not enough. At the same time, local, regional and national health systems need to be strengthened. On behalf of the governments of Tanzania and Switzerland, he implemented major health programmes in the areas of health planning and training of health personnel. After obtaining a Master's degree in Public Health at the London School of Hygiene & Tropical Medicine (1986-1987), he devoted himself to numerous research projects in the epidemiology and control of infectious diseases (especially malaria). In addition, on behalf of the SDC, he managed major health programmes and research projects in rural and urban areas of Tanzania and Chad. He was instrumental in the development of malaria vaccines (SPf66, RTS,S) for Africa. From 1996-1997 and 2009-2010, Marcel Tanner has been a regular lecturer and researcher at the University of Queensland (Australia) and the Papua New Guinea Institute for Medical Research (PNGIMR). Full Professor and Dean of the Faculty of of Natural Sciences at the University of Basel (2002-2004), he headed the Swiss Tropical and Public Health Institute (Swiss TPH) between 1997-2015, during which time he developed the Swiss TPH into a world-renowned institute of global health. Marcel Tanner is a member of many national and international committees and advisory boards in the fields of health planning (in North and South), public health and the fight against and elimination of diseases of poverty and neglected tropical diseases.