Basic healthcare in Tanzania, supported by general health insurance – this is the objective of a joint project with the Swiss Agency for Development and Cooperation (SDC). The system, which is based on smartphone technology, promises improved security of supply and will allow for more efficient health care services in local health centres. The project also forms the basis of a national Tanzanian health insurance model. 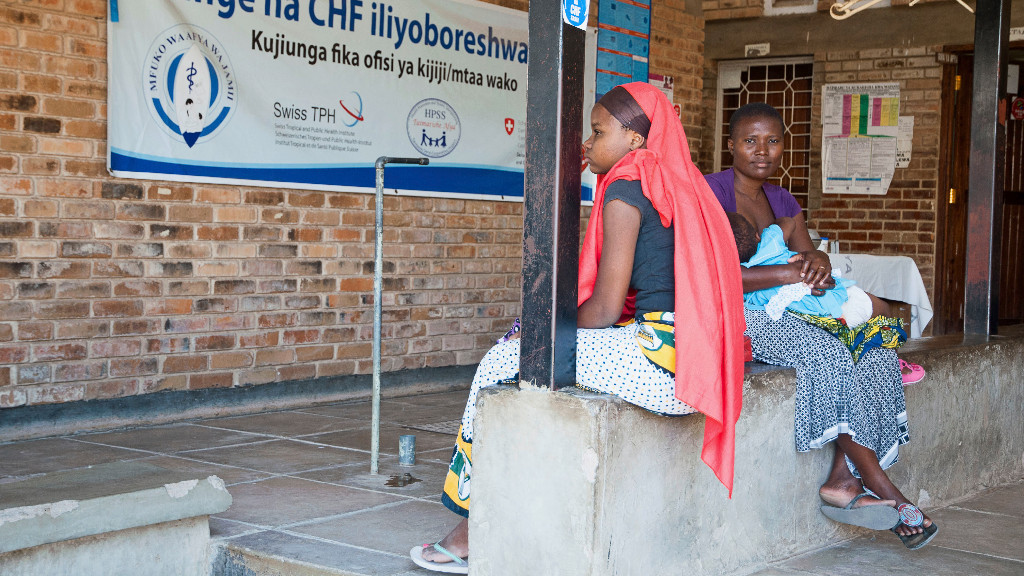 A boy plays with a car made of plastic bottles. An elderly woman balances a water container on her head. These are typical scenes in rural Africa. At the same time, however, technology is making its way into everyday village life. A representative of the community health fund takes a picture of a young father with his smartphone. Forms are exchanged and the premium for the first year is paid.

Now, the proud village resident is a member of “CHF Iliyoboreshwa” – the improved community health fund. The freshly laminated insurance card with its QR-code will now enable him and his family to benefit from free medical services at the health centres and hospitals in the region. For the equivalent of five Swiss francs per year, the insurance policy guarantees basic health care and hospital access for six members of one household – a first for rural Tanzania.

Most Rural Residents Are Not Insured

In Tanzania, a national health insurance is available. “But it is a privilege for state employees and other wage earners”, says Manfred Stoermer, project leader from Swiss TPH. Most people in the rural regions of Tanzania, however, are not on any payroll. They offer their goods for sale at markets, or keep their heads above water by doing various jobs. The health community fund (CHF) is intended precisely for these people. Since its launch in 1996, however, confidence in the CHF has suffered. Corruption, a lack of medication, insufficient treatment and access to health centres only: people were reluctant to join. Today, just 2% to 3% of the population are members of the CHF.

A Health Insurance Fund for the Informal Sector

The health insurance fund model developed by Swiss TPH for rural districts is called CHF Iliyoboreshwa or improved health fund. The model is based on an IT system that facilitates rapid registration in the villages, electronic exchange and the storage of health data. Mobile technology is helping to significantly improve the work of health care staff and reliability for patients.

For treatment in hospitals or health centres, all the patient has to do is show their insurance card with its QR-code. When the card is scanned using the doctor’s smartphone, a photo of the member of CHF Iliyoboreshwa, their insurance policy and their health data appear on the screen. After the treatment, an electronic invoice is issued to the insurance fund, and the hospital receives payment for the treatment provided and any medication supplied. New medication is ordered directly from the supplier.

“The system is relatively corruption-proof,” says Manfred Stoermer, “as every patient and every transaction leaves an electronic trail.”

Member data are stored in encrypted form on a central server belonging to the Tanzanian government in Dodoma. 23 districts with about 850 health centres are connected to the server. The level of trust appears to be improving. In Dodoma alone, the number of members has increased from 4% to 10% since the project was launched in 2011.

Health Insurance for All?

Tanzania has made important steps towards reducing child mortality or containing the spread of infectious diseases such as malaria. Nevertheless, it needs further efforts to strengthen health systems – in the periphery as well as on a national level. The HPSS project and the CHF Iliyoboreshwa are important milestones on the way to achieve this aim.

The Tanzanian government is considering making the CHF Iliyoboreshwa the national health insurance fund. This is a long way off, however. Integration will, for example, also call for a solution for the absolute poorest in society, as one-sixth of the Tanzanian population is unable to afford health insurance. “My vision is for the Tanzanian state to support the poorest from tax revenue,” says Manfred Stoermer.

One thing is clear: as long as their health risks remain uninsured, a health insurance for all will remain nothing but a dream.

The CHF Iliyoboreshwa is part of the comprehensive Health Promotion and System Strengthening (HPSS) project in Tanzania, which is aimed at reinforcing the health system in the Dodoma region. The project is financed by the Swiss Agency for Development and Cooperation (SDC), and is being implemented by Swiss TPH.