10 Years Swiss TPH: Integration of the ISPM into the Former Swiss Tropical Institute

Ten years ago, the former Institute of Social and Preventive Medicine (ISPM) within the University of Basel’s Faculty of Medicine was integrated into the Swiss Tropical Institute (STI). Since then, topics such as air pollution, cardiovascular diseases and diabetes have been high on the agenda at the Swiss Tropical and Public Health Institute (Swiss TPH), as it is called today. Thanks to this step, Swiss TPH is in a unique position to offer comprehensive solutions for the health challenges of the 21st century. Read the interview with key people involved in Swiss TPH’s story: Nino Künzli, Nicole Probst-Hensch and Martin Röösli. 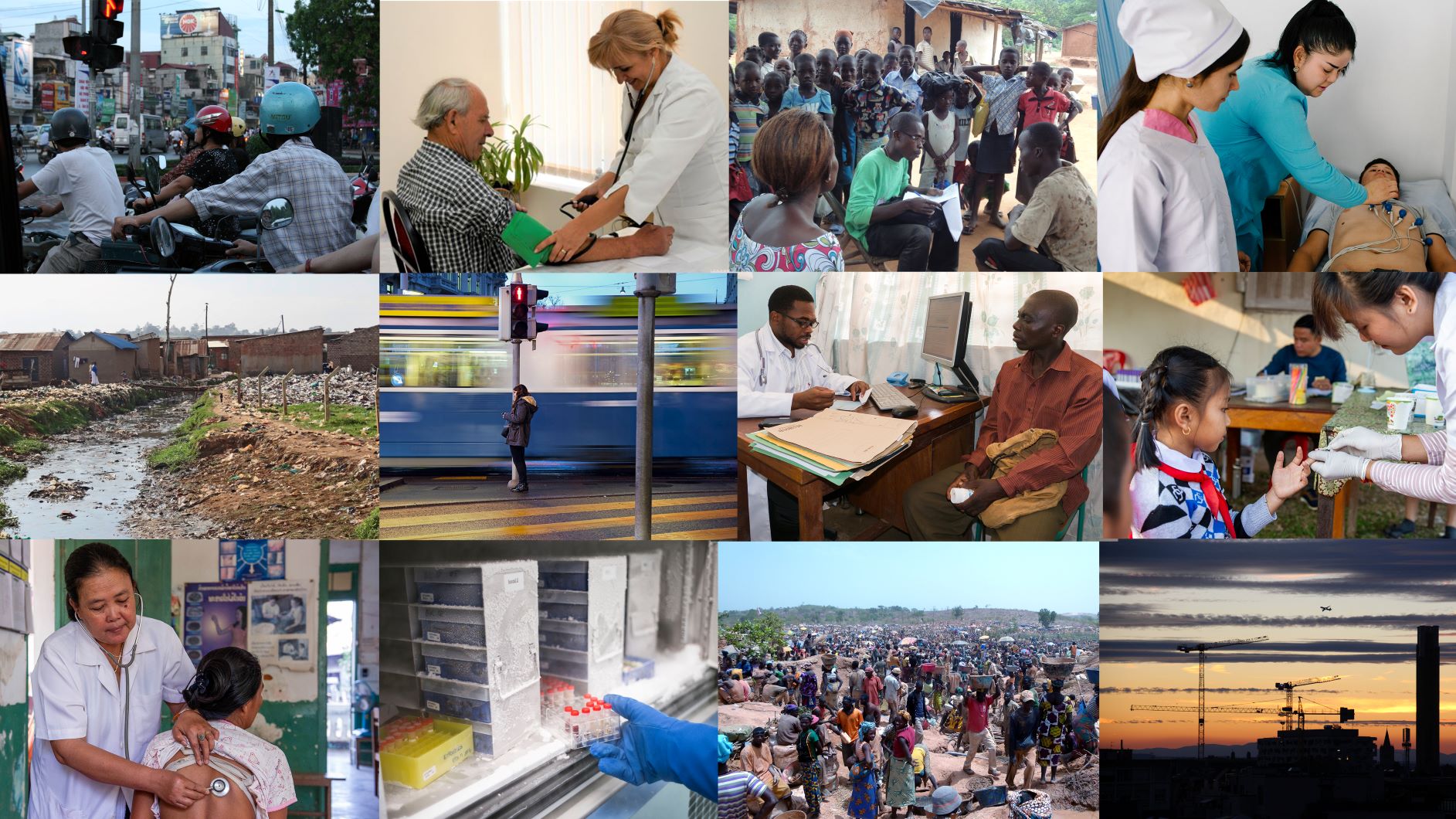 Mr. Künzli, you and the Director emeritus of the former STI, Marcel Tanner, carried out the integration of ISPM ten years ago. What has been achieved since then?

Nino Künzli: “The integration has brought together two different traditions and sources of expertise under one roof. STI was especially strong in the areas of research in poverty-related diseases, such as malaria and sleeping sickness, as well as healthcare system research in African countries. ISPM was known for its public health research in the area of chronic diseases and their connection with pollutants in the environment, along with the establishment of biobanks in Switzerland and other health issues. As a result of the merger, we are now in a unique strategic position to tackle the global health challenges of the twenty-first century.”

Why is this important?

Nino Künzli: “There is still a risk of traditional infectious diseases, such as malaria, tuberculosis and HIV/AIDS, but thanks to successful research, these infectious diseases can be treated more effectively. Other risks we face are that people are growing older, the disease burden is increasingly dominated by the consequences of environmental pollution, and a westernised lifestyle and non-communicable diseases such as diabetes are more prevalent. Such chronic diseases will – including COVID-19 – present the greatest challenges for global healthcare systems in the future.”

Will traditional infectious diseases be replaced by chronic diseases?

Nicole Probst-Hensch: “No, but we are seeing a new challenge in co-morbidities and aging. Traditional and new infections appear with chronic diseases, which raises many new questions. The coronavirus, which mainly poses a danger to the older population, is a good example of this unhealthy combination. In addition, there has been little research, for instance, on the impact of malaria or parasitic worm infections on heightened blood pressure or diabetes or into the effect of extreme air pollution on the spread and treatment of infectious diseases.”

Swiss TPH is increasingly working at the intersection of infectious diseases, chronic illnesses and environmental factors in low- and middle-income countries, but how has the integration of STI affected Switzerland as a research location?

Martin Röösli: “Swiss TPH is better able to fulfil its mission today as a result of the integration ten years ago: it has been able to improve the health of populations not only at an international level, but also at the local and national levels. Swiss TPH plays an important role in Switzerland for example through the SAPALDIA (Swiss Cohort Study on Air Pollution and Lung and Heart Diseases in Adults) biobank, which is the first and largest biobank in Switzerland. It serves as the basis for the development of a national large-scale cohort and biobank, the Swiss Citizen Cohort. The data stored in the SAPALDIA biobank enables new findings on the prediction and prevention of chronic diseases like diabetes or Alzheimer’s disease, about comorbidities in old age and about optimal health system management.”

A focus on chronic diseases and the establishment of biobanks

At the same time that the integration of ISPM into STI was completed, Nicole Probst-Hensch, the Head of the Department Epidemiology and Public Health at Swiss TPH, was called from Zurich to Basel in autumn 2009. Marcel Tanner and Nino Künzli, the Deputy Director of Swiss TPH, were able to convince her and her team about the vision of Swiss TPH. With her as the main person overseeing the SAPALDIA study, the research agenda at Swiss TPH was expanded to include a focus on chronic diseases and expertise in biobanking.

For nearly 30 years, SAPALDIA has been collecting complex life and health data from nearly 10,000 people from all over Switzerland. Thanks to this long-term study, we know, for example, the impact that smoking, nutrition, high blood pressure and stress have on the health of older people. These results have had a substantial impact on Swiss health policy. The study also made a critical contribution to the stringent legal limits on particulate matter that are in place in Switzerland today. At the international level, the results were included in the air quality guidelines issue by the World Health Organization (WHO).

In order to promote further research into non-communicable diseases, Swiss TPH and its partner networks have invested in the development of long-term studies in Kosovo, Africa, South-East Asia and South America.

Swiss TPH recently built the first biobank in rural Africa in collaboration with the Centre Suisse de Recherches Scientifiques (CSRS) and its former Director General, Bassirou Bonfoh. A long-term study in Taabo, a CSRS research location, is looking into the connection between diabetes, high blood pressure and infectious diseases. The physicians trained as part of the study examine and treat patients. Samples are stored and transported to the national biobank at the Pasteur Institute, in the city of Abidjan in refrigerated trucks.

The first results of this particular study have shown that malaria and fever have an impact on high blood pressure. In order to be able to properly diagnose chronic diseases and collect dependable epidemiological data, a diagnosis should only be made when the patient is fever-free. “This does not prove, however, that people with high or low blood pressure will later develop a greater risk for malaria infection”, notes Probst-Hensch. “It is precisely to answer questions such as these, that long-term data and samples are needed.”

South Africa has become a focal point of environmental research conducted by Swiss TPH in recent years. The country has been a strategic focus of research and technical collaboration with Switzerland since 2007. The University of Basel and Swiss TPH function as a so-called “Leading House” for sub-Saharan Africa. In this context, the joint Chair for Global Environmental Health was established five years ago at the University of Cape Town and Swiss TPH. “In addition to all its natural beauty, South Africa provides numerous opportunities for studying a range of environmental exposures,” said Röösli, Head of Environmental Exposures and Health at Swiss TPH.

Major social inequality also results in differences in environmental quality. For example, it is not widely known that people living in the poorer townships view noise pollution as a serious problem. “We are trying to research the impact of noise on the health of township residents,” said Röösli. “There is a substantial amount of noise pollution from loud generators, from roads and from people themselves.”

In addition to noise, Röösli and his team focus on the effects of pesticide residue on human health. For instance, a research group recently found residue from 53 different pesticides in major agricultural areas in the Western Cape. A long-term cohort study is now dedicated to examining the impact of this risk on the behaviour and physical development of schoolchildren.

A model for other African countries

To date, the joint environmental research conducted by Swiss TPH and the University of Cape Town has been limited to establishing an epidemiological basis. The next phase of the project will focus on improving human health through targeted interventions. However, this will require politicians to do their part as well, which is no easy task in a country like South Africa.

While the Swiss political authorities base their decisions on scientific findings, the connection between science and politics is not as closely linked in South Africa. “It will be a major challenge to persuade the authorities in South Africa and get them to implement our findings,” said Martin Röösli. Only time will tell how successful this effort is. But it is already clear that the research work performed by Swiss TPH and the University of Cape Town holds important findings for other African countries too.

“South Africa is ahead of other sub-Saharan countries in terms of its economic development. Therefore, questions about the health effects of pesticides, noise, air pollutants, climate change and electromagnetic radiation will also become more urgent in other African countries in a couple of years,” said Röösli. “If we are to tackle these problems efficiently with the limited resources available, it is important to work together to develop new and at times unconventional solutions.”

The fact that Swiss TPH will be able to make an active contribution to addressing topics such as air pollution and climate change is due in part to the successful integration of the former ISPM into STI exactly ten years ago.