Molecular Signatures can Predict the Efficacy of Malaria Vaccines

A new study reveals that it is possible to identify those individuals that will be protected by the malaria vaccine before its administration. The researchers also found that boosting the immune system before vaccination could potentially improve vaccine efficacy. The study was published yesterday in Science Translational Medicine by ISGlobal in partnership with the Swiss Tropical and Public Health Institute and other partners. 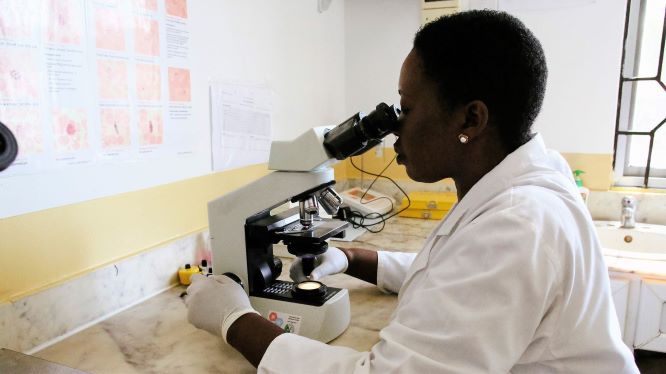 Malaria remains a major public health problem, causing almost 200 million cases and over 400,000 deaths in 2018. The main obstacles for the development of an effective vaccine against such a complex parasite are the lack of immune markers of protection and the poor understanding of the mechanisms underlying such protection.

Distinct gene expression signatures before and after immunization can predict vaccine-induced protection, according to a study published yesterday in in the peer-reviewed journal Science Translational Medicine. Researchers from ISGlobal in Barcelona, Swiss TPH and other partners analysed the gene expression in peripheral white blood cells from infants and children immunized with the most advanced malaria vaccine (Mosquirix or RTS,S) and another experimental malaria vaccination approach targeting also the pre-erythrocytic stage of malaria.

In this study, the research team used genomics technologies combined with data science and artificial intelligence to identify molecular signatures that predict vaccine efficacy (or immunogenicity). They compared two vaccines: i) the Mosquirix vaccine that is currently being tested in large-scale pilot implementation studies in Africa and that provides partial protection in the field, and ii) the CPS vaccine, based on the inoculation of attenuated sporozoites of the Plasmodium falciparum parasite, which has a high efficacy in adult volunteers against controlled human malaria infection.

The researchers used white blood cells obtained from 24 adult volunteers before and after CPS immunization, and from 225 infants or children from three African countries that participated in the Mosquirix phase 3 clinical trial. A comprehensive analysis of genes expressed by the white blood cells after immunization revealed a molecular profile associated with protection, for both vaccines. More surprisingly, the study also identified a baseline signature, (i.e. prior to immunization) that correlated with protection. "This suggests that we could identify individuals who lack such baseline signature and give them a higher CPS vaccine dose, or simply boost their immune system before vaccine administration to improve its efficacy," explains ISGlobal researcher and first author of the study, Gemma Moncunill.

Claudia Daubenberger, Head of the Clinical Immunology unit at Swiss TPH said: "Description of unique transcriptional signatures in subgroups of volunteers that do not mount desired, protective immune responses after immunisation will pave the way for personalized immune-interventions in infectious diseases."

"These results, obtained with two different vaccines and groups of individuals, suggest there are common protective responses against malaria," says Carlota Dobaño, study coordinator and head of the Malaria Immunology Group at ISGlobal. "The results also confirm the potential of this type of approach to better understand the immune response to vaccines and molecular signatures associated with protection against complex diseases."

The authors conclude that the signatures of protection could be useful as in vitro surrogates to determine the efficacy of these and other malaria vaccine candidates in clinical trials and accelerate their testing.

The malaria vaccine trials were performed by ISGlobal in collaboration with Swiss TPH, the Manhiça Health Research Center in Mozambique, the Ifakara Health Institute in Tanzania, the University of Tubingen in Germany, the Centre de Recherches Médicales de Lambaréné in Gabon, and the Radboud University Medical Center in The Netherlands.