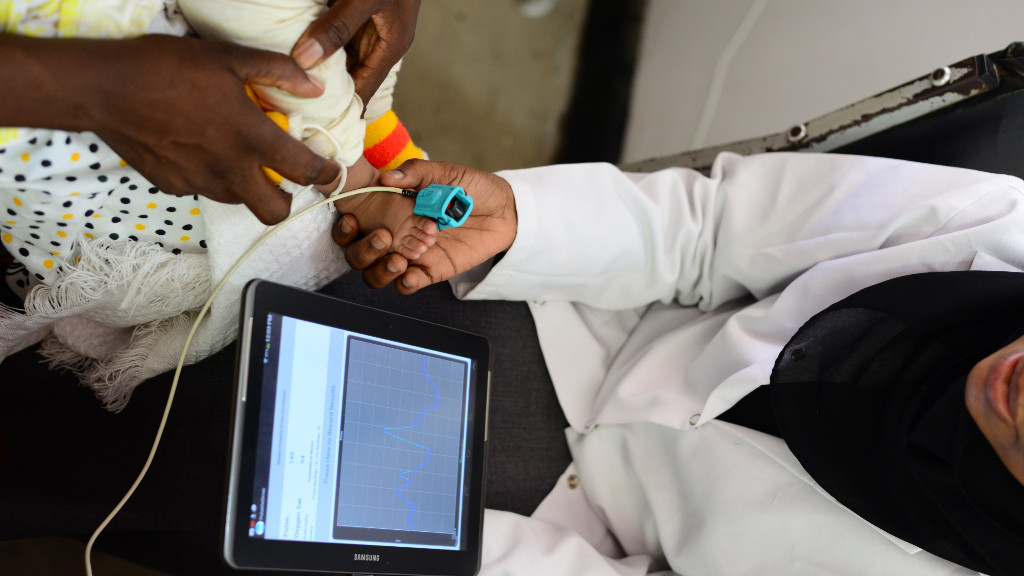 ePOCT not only guides health workers through the consultation but also integrates point-of-care laboratory tests.

When worried parents brought their febrile children to a health facility in Tanzania ten years ago, the diagnosis they received was very often the same: malaria. “This wrong assumption meant that many children were sent home with antimalarial medicines without being properly diagnosed,” said Valérie D’Acremont, medical doctor and fever management specialist at Swiss TPH.

The introduction of malaria rapid diagnostic tests in 2008 drastically reduced incorrect prescriptions of antimalarials. However, it also resulted in what was soon to be called the “negative syndrome”: the 90% of malaria-negative children that presented with a fever. Health workers could often not establish the cause of the fever with the available tools and hence prescribed antibiotics to almost every patient out of the fear of missing a severe bacterial infection.

How to manage malaria-negative children

Several studies conducted by Swiss TPH since 2008 revealed that out of 10 febrile children presenting at a health facility in cities in Tanzania, one had malaria, treatable with an antimalarial, and one had a bacterial infection, requiring an antibiotic. The remaining 8 in 10 children suffered from a variety of viral infections such as viral respiratory infections, roseola or a stomach flu. “Although the study results meant that less children than assumed suffered from a deadly disease, they actually posed a new challenge for health workers,” said Valérie D’Acremont. To pick out the few bacterial infections among the 90% of malaria-negative children poses a challenge to health workers, in particular given the lack of diagnostic tests and clear guidelines.

In addition, viral infections have to be managed appropriately as well in order to avoid complications or even death. “We have seen, for example, that health workers prescribe antibiotics for bronchiolitis, a common viral lung infection in small babies,” said Kristina Keitel, paediatrician at Swiss TPH. “However, truly needed treatments such as oxygen and rehydration are not given.”

Integrated Management of Childhood Illness (IMCI) is a symptom-based assessment scheme developed by WHO in the 1990s to enable diagnosis and treatment of sick children. To improve child health and facilitate application of IMCI in the daily work, Swiss TPH, in collaboration with the Policlinique Médicale Universitaire in Lausanne and the Ifakara Health Institute in Tanzania, developed ALMANACH (Algorithms for the Management of Childhood Illnesses); a tablet-based clinical decision support tool. ALMANACH is now being implemented through a collaboration with the International Committee of the Red Cross (ICRC).

“ALMANACH simplified very much the diagnosis and leads me step by step during the assessment,” said Christy Lazarus, midwife in the Adawama state in Nigeria. “It has also increased my knowledge and gives me more self-confidence as health worker.” ALMANACH has been piloted in conflict-torn areas in both Afghanistan and Nigeria and is currently being scaled up in the Adamawa state in Nigeria.

To even further improve diagnosis, Swiss TPH developed a next generation tool: ePOCT (electronic Point-Of-Care Tool) funded by the Swiss Programme for Research on Global Issues for Development (r4d programme). “IMCI has important limitations in that it over-relies on clinical assessments”, said Kristina Keitel. “Simple, point-of-care laboratory tests can help detect children with severe infections and those requiring antibiotic treatment.”

Results of a clinical trial in Tanzania published in PLOS Medicine in 2017 showed improved health outcomes and a reduction in antibiotic prescriptions. The trial which was conducted in collaboration with the Ifakara Health Institute (IHI) and the Dar es Salaam City Council, compared the clinical outcomes and antibiotic prescription between ePOCT, ALMANACH, and routine care among over 3000 children.

“Children treated with ePOCT had a better health outcome compared to the reference algorithm,” said Josephine Samaka, assistant medical officer at Amana Hospital, Tanzania, and co-author of the study. “In addition, we could further reduce antibiotic prescription by two thirds.” Based on these promising results, the next step will now be to start implementing ePOCT in Tanzania eventually aiming at integrating the tool into routine care for children. This work will be carried out in close collaboration with Swiss TPH’s Tanzanian partners.

A centre of expertise in eHealth

As a WHO Collaborating Centre for Health Technology Management and eHealth, Swiss TPH designs and implements various initiatives related to eHealth ranging from designing devices and tools, programming software, implementing projects and building capacity, to evaluating effectiveness and developing eHealth strategies and policies. Swiss TPH will actively participate at this year’s Geneva Health Forum on “Precision Global Health in the Digital Age” from 10-12 April 2018. Swiss TPH also organizes a symposium on the topic of “Clinical Decision Support and Health Information Systems – Potential and Pitfalls of New Technologies” on 25 April in Basel.