Currently, around 910,000 Rohingya refugees live in Cox’s Bazar District in Bangladesh after having fled violence faced in Myanmar, resulting in one of the most rapid exoduses in modern history. In a project funded by UNICEF and coordinated by Swiss TPH, a study was conducted to identify and understand WASH practices of the populations living in the camp. This study supports UNICEF in the design and development of targeted WASH interventions, contributing to improved living conditions in the refugee camp. 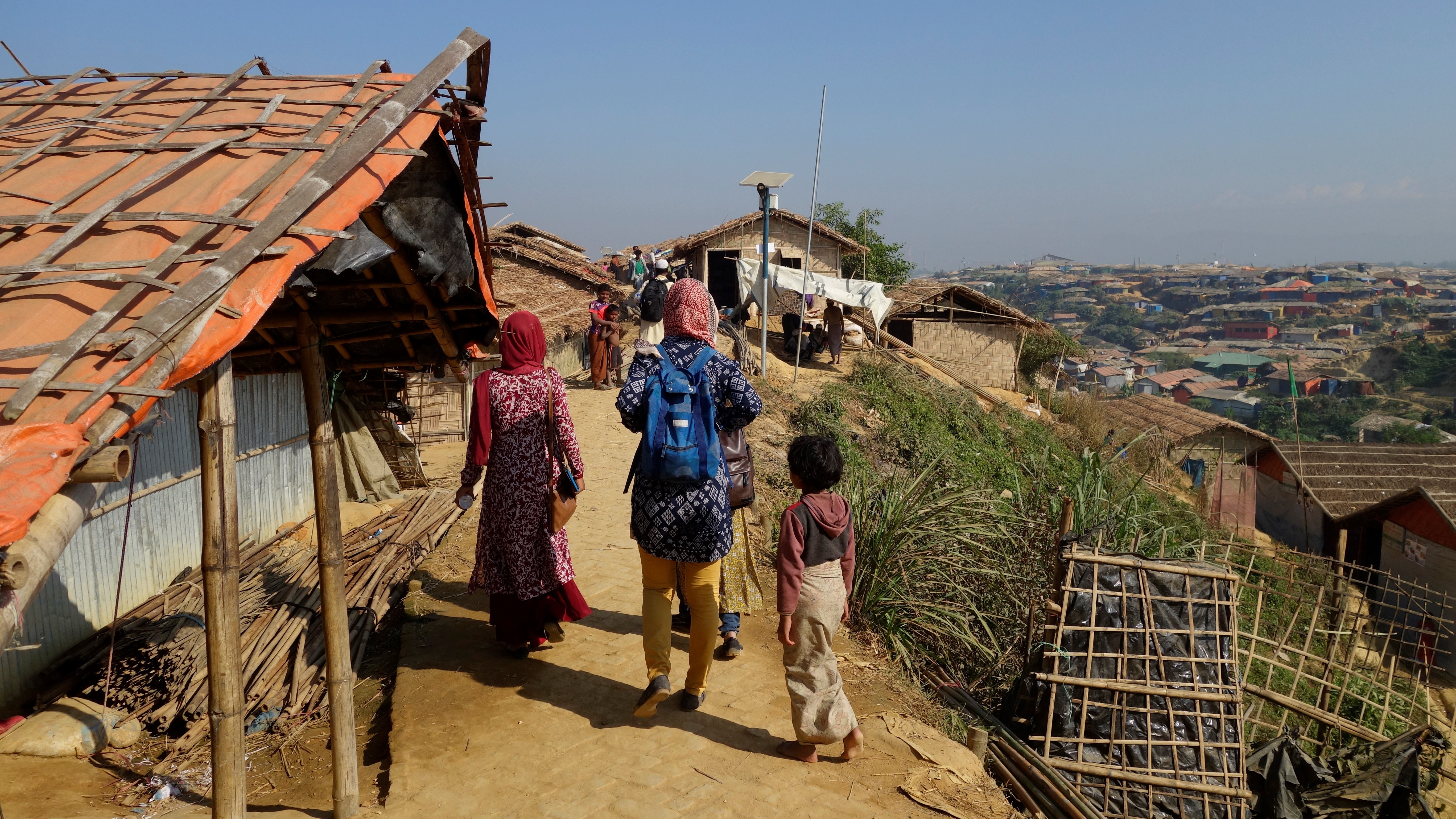 Over half of the refugees living in Bangladesh are under 18 years old. Photo credit: Helena Greter

One of the most rapid exoduses in modern history

Since August 2017, Bangladesh has been facing new humanitarian challenges as Rohingya refugees have settled into the Cox's Bazar District in Bangladesh after fleeing violence faced in Myanmar's Rakine state. The arrival of around 700,000 Rohingya refugees joined the 212,000 people already residing in Bangladesh from previous waves of displacement, effectively forming the largest refugee camp in the world.

The Rohingya are a Muslim ethnic group who have faced discrimination in Myanmar, a majority Buddhist country, for decades. The main reason for clashes and violent attacks between the Myanmar government and the Rohingya people is due to their religious differences and ethnic identities, which date back to the 1800s. So far, the government of Myanmar does not acknowledge Rohingya as citizens, making them one of the largest stateless groups in the world.

The sheer magnitude of the Rohingya influx into the Cox's Bazar district in such a short period has led to enormous challenges, especially in regards to water, sanitation and hygiene (WASH) efforts in this temporary community. Currently, there is a concern about the upcoming monsoon season from June to October, which poses serious risks including flooding and disease outbreaks that could occur if the rain overwhelms the water systems, mixing sewage with drinking water.

Reducing the pressure on water and sanitation facilities

Access to WASH is a key public health issue: without latrines, water sources become contaminated; without access to clean water, basic hygiene is not possible. To reduce the pressure on water and sanitation facilities in Cox's Bazar, which includes more than 40,000 latrines and shallow wells, WASH efforts have been put in place.

In a project funded by UNICEF and coordinated by Swiss TPH and with the International Centre of Diarrhoeal Diseases Research Dhaka, Bangladesh (icddr,b) as a key partner, a study was conducted on knowledge, attitudes, behaviours and practices (KABP) related to WASH in Cox's Bazar. The results provide the basis for targeted WASH interventions within the community, contributing to improved WASH practices.

Creating a basis for targeted interventions

The study was comprised of two components: a qualitative study consisting in 36 focus group discussions with people living in the camp and 22 interviews, as well as a survey in 2,041 households on behaviours related to treatment and safe water, sanitation, hygiene and menstrual hygiene management.

This study was unique in that it paid attention to the communities' beliefs, motivators and barriers regarding good WASH practices, including safety, dignity and privacy considerations, which are often left out in surveys conducted in refugee camps. Moreover, the study was built on the RANAS conceptual framework[1], which consisted of identifying underlying factors that promote or inhibit behaviour change. The RANAS approach was helpful to determine the extent in which risks, attitudes, norms, ability or self-regulation needs to be targeted in order to change the behaviours.

Results from the survey suggested overall improvements throughout the camp in comparison with previous assessments. Nonetheless, child open defecation remains a key priority for the WASH interventions as open defecation among children is not perceived as negatively as open defecation among adults, though poses a threat. Insufficient water treatment and limitation of water are other key issues that need to be addressed. "Our findings show that most of the refugees have the knowledge required to adopt good practices related to WASH, but this is not necessarily translated into practice. Therefore, the lack of knowledge is not a barrier," said Lise Beck, Public Health Specialist and Demographer at Swiss TPH.

With its efforts to contribute to improve access to clean water and sanitation to people living in resource-poor settings, Swiss TPH works towards the SDG targets of: