The largest global study to date on the effects of climate change on temperature-related mortality shows that more deaths due to hot weather may not be balanced by fewer deaths in colder world regions should global temperatures continue to rise. Swiss TPH, working for improved health of the people around the globe, prepared the data set for Switzerland. 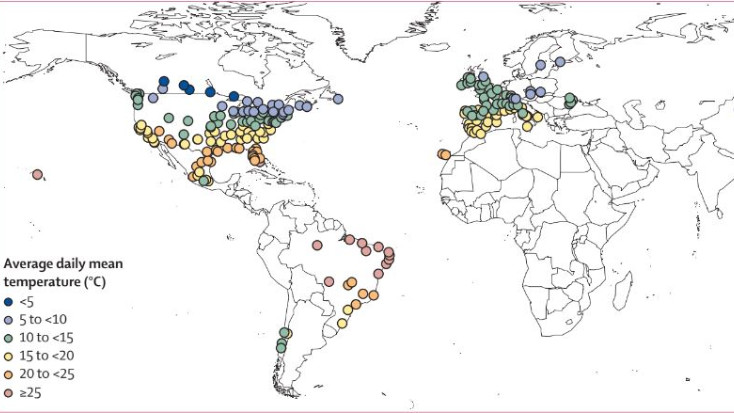 Map of the European and American locations included in the analysis. The locations represent metropolitan areas, provinces, or larger areas from 23 countries within nine regions. The colours represent different ranges of average daily mean temperature, computed.

The paper entitled “Projections of temperature-related excess mortality under climate change scenarios”, published in The Lancet Planetary Health by the London School of Hygiene & Tropical Medicine (LSHTM), compared heat- and cold-related mortality across 451 locations in nine regions and 23 countries, Switzerland being one of them.

According to LSHTM, the research involved created the first global model of how mortality rates change with hot or cold weather. The data used includes 85 million deaths between 1984 and 2015 from a wide-range of locations with different climates, socioeconomics and demographics. This enabled the team to estimate how temperature-related mortality rates will change under alternative scenarios of climate change as defined by the Intergovernmental Panel on Climate Change.

Heat and Mortality in Switzerland

Martina Ragettli, epidemiologist at the Swiss Tropical and Public Health Institute (Swiss TPH) is co-author of the LSHTM-study. She prepared the data set for Switzerland, which was also used in the Swiss TPH-paper “Exploring the association between heat and mortality in Switzerland between 1995 and 2013” (in Environmental Research, October 2017). The data includes daily mortalities of eight Swiss cities (Basel, Zurich, Lugano, Berne, Lausanne, Geneva, Lucerne, St. Gallen) for the time period 1995–2013. The study was funded by the Swiss Federal Office of Public Health and Federal Office for the Environment.

Martina Ragettli said: “Climate change is a challenge for the health systems and our study in Switzerland indicated that heat-related mortality can be reduced by suitable public health measures.”

Planet out of Balance

Although previous studies have shown a potential rise in heat-related mortality, little was known about the extent to which this increase would be balanced by a reduction in cold-related deaths. The LSHTM-study shows that more deaths due to hot weather may not be balanced by fewer deaths in colder regions should global temperatures continue to rise.

Climate change is likely to disproportionately affect the warmest, most populated and in some cases poorest areas with warmer regions of the planet facing sharp net increase in mortality rates. Cooler regions such as Northern Europa could experience either no change or a marginal decrease in deaths.

Net Increase in Deaths of +3.5% in Central Europa

Central Europe, including Switzerland, shows results that are intermediate between the two groups. If no action is taken by 2090–99, a net increase in deaths of +3.5% is projected in Central Europe by the end of this century. The change is driven by a sharp surge in heat-related impacts.

The authors of the global study, which appeared during the UN Climate Change Conference in Bonn, Germany, stressed that most of the health effects directly due to temperature increase could be avoided under scenarios that limit emissions and further warming of the planet.

“Climate change is widely recognized as the biggest global threat in our century. The paper shows that related deaths will escalate in the absence of decisive action to reduce the emissions of carbon dioxide and short-lived climate pollutants such as methane and black carbon. Such action could also result in major benefits in the near term by reducing deaths from air pollution.”

Swiss TPH is a world-leading institute in global health with a particular focus on low- and middle-income countries. Associated with the University of Basel, Swiss TPH combines research, services, and education and training at the local, national and international level. Over 800 people from more than 70 nations work at Swiss TPH focusing on infectious and non-communicable diseases, environment, society and health as well as health systems and interventions.