A new type of bed net with two active ingredients, a pyrethroid insecticide plus an insect growth hormone, could prevent millions of cases of malaria according to a new study published yesterday in The Lancet. Swiss TPH contributed to the study through statistical design and data analysis. 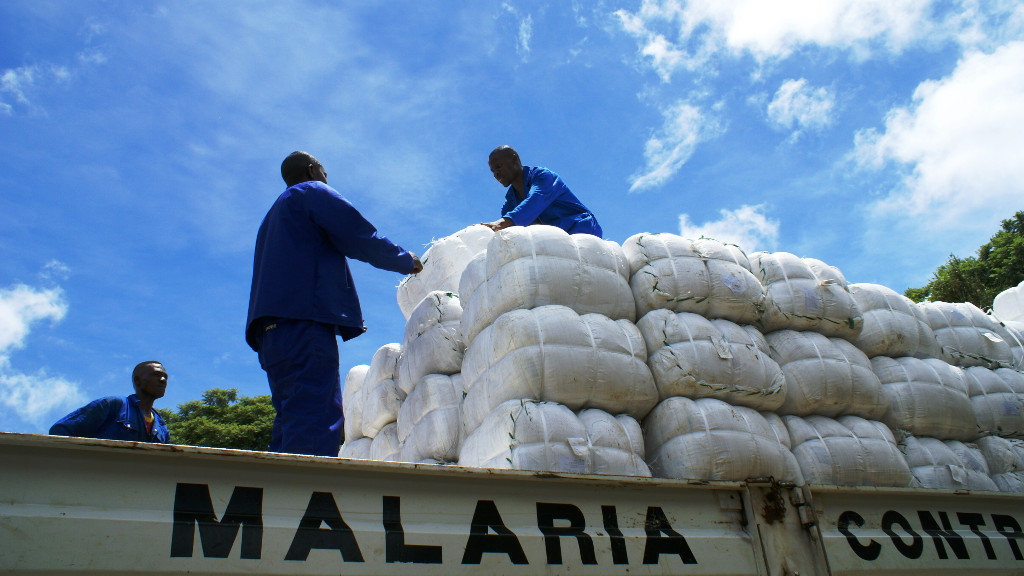 Study finds that combination nets are a better choice for tackling malaria in areas where mosquitoes are resistant to the single chemical used in traditional bed nets. (Photo: Todd Jennings for Swiss Malaria Group)

The latest figures from the World Health Organisation (WHO) show that approximately 216 million people were infected with malaria in 2016 worldwide, an increase in five million from the previous year. 445,000 people died of the infectious disease in 2016 with the majority being children under the age of five in the poorest parts of sub-Saharan Africa.

In several areas in sub-Saharan Africa, mosquitoes have become resistant to the single chemical used in traditional bed nets. This is also the case in Burkina Faso with more than 10 million cases annually.

A two-year clinical trial in Burkina Faso involving 2,000 children was the first study to compare a new type of mosquito net with two active ingredients, a pyrethroid insecticide plus an insect growth hormone, to a traditional net treated with a pyrethroid alone. Results were published yesterday in the The Lancet.

The clinical trial showed that the number of malaria cases was reduced by 12% with the new type of bed net compared to the conventional one. In addition, the risk of being bitten by a malaria-infected mosquito decreased by 51% with the new nets. The study also found that children sleeping under the new combination bed nets were 52% less likely to be moderately anaemic than those with a conventional net. Malaria anaemia is a major cause of mortality in children under two years old.

The Swiss Tropical and Public Health Institute (Swiss TPH) contributed to the study through statistical design and data analysis. "The results from this trial should help to add another effective intervention against malaria. Continued research and development of new innovations like this are badly needed if we are to make further progress against malaria in countries like Burkina Faso." said Thomas Smith, Head of Infectious Disease Modelling at Swiss TPH.

The number of mosquito bites and incidence of malaria in the children in the study were recorded by health clinics and the number of mosquitoes in the houses was tracked through monthly light traps collections inside houses. A number of randomly selected children were visited at home four times and examined for signs of illness. Their blood levels were also tested for possible anaemia.

Conventional bed nets were replaced with the new combination nets in 40 rural clusters in Burkina Faso covering 91 villages and involving 1,980 children in 2014 and 2,157 in 2015. The children were between six months and five years of age.

Malaria is an infectious disease caused by Plasmodium parasites. The parasites spread to people through the bites of infected female Anopheles mosquitoes. Malaria still causes a large disease burden in tropical and sub-tropical countries, particularly in sub-Saharan Africa. The main way to prevent and reduce malaria transmission is through vector control. WHO recommends both insecticide-treated mosquito nets and indoor residual spraying for controlling malaria mosquitoes.

Centre of expertise in malaria

Swiss TPH is a world-leading institute in the field of malaria research and control, with more than 200 staff and students actively involved in addressing various aspects of the disease. Activities range from researching parasite biology, host-parasite interactions and host immunity, to developing, validating and applying novel drugs, vaccines and diagnostic tools, and to formulating new strategies for integrated intervention programmes to control and eliminate the disease. Swiss TPH also hosts a WHO Collaborating Centre for Modelling, Monitoring and Training for Malaria Control and Elimination.

"Efficacy of Olyset® Duo, a pyriproxyfen and permethrin mixture bednet, against clinical malaria compared with standard nets in an area with highly pyrethroid-resistant vectors in rural Burkina Faso: a cluster-randomized controlled trial."Tiono et al, published in The Lancet, 10.08.18