Researchers at Swiss TPH made an important step toward deeper understanding of how malaria blood stage parasites turn the switch to become transmissible to other humans. This knowledge is fundamental for future research aiming to interrupt malaria transmission. The results will be published on Friday 16 March 2018 in the multidisciplinary journal Science. 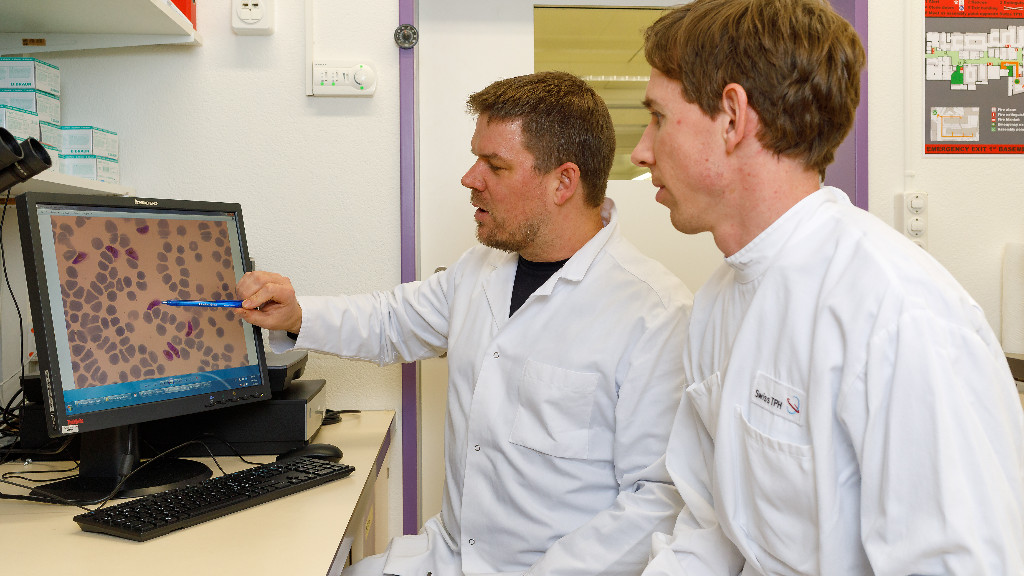 Malaria parasites multiply asexually in the human bloodstream, thereby causing chronic infection and all the complications associated with this devastating disease. During each round of multiplication, a small proportion of parasites develop into non-dividing gametocytes instead. Gametocytes are infectious to mosquitoes and are therefore the catalyst for transmitting malaria to other humans. Understanding how malaria parasites control the switch to gametocyte production is central to support the development of therapeutic interventions that could block malaria transmission.

How malaria parasites turn the switch

Whether a parasite continues to multiply or develops into a gametocyte is controlled by a molecular switch. A recent publication in Cell demonstrated that this switch responds to a lipid molecule present in human blood: lysophosphatidylcholine (LPC). Under high LPC concentrations, parasites multiply, consuming LPC to build new membranes. When LPC concentrations drop, as they do during acute infections, parasites convert into gametocytes to secure their transmission to the next human host.

Researchers at the Swiss Tropical and Public Health Institute (Swiss TPH) have now identified a parasite protein (GDV1) that plays a crucial role in activating the gametocyte conversion switch. “GDV1 basically ignites a process that reprograms gene expression in the parasite such that gametocyte development occurs”, said Till Voss, corresponding author of the study and Head of the Malaria Gene Regulation Unit at Swiss TPH.

The study in Science further shows that GDV1 is only produced in parasites destined to develop into gametocytes. In multiplying parasites, an inhibitory molecule prevents expression of GDV1. “We were amazed to observe that after targeted disruption of this inhibitory molecule using CRISPR-Cas9 technology, all parasites expressed the GDV1 protein”, said Michael Filarsky, first author of the study and scientist at Swiss TPH. Another important finding of this study is that GDV1 production is likewise inhibited by LPC. “This is exiting. We are onto the molecular pathway that transports an environmental stimulus into the parasite to activate gametocyte development”, concludes Voss.

“Fundamental knowledge and a new tool for future research”

Drugs and vaccines that target gametocytes are urgently needed to reach the declared aim of eliminating and eradicating malaria. “Although our study does not offer immediate solutions for novel therapies, it sheds new light on the mechanisms responsible for the production of gametocytes,” said Till Voss. “If we can block this mechanism or eliminate gametocytes altogether, we might get an important step closer to interrupting malaria transmission.”

The new knowledge also allows Swiss TPH scientists to produce high quantities of gametocytes in the laboratory. “Research on gametocytes is hampered by the fact that they usually only arise in very small numbers”, said Michael Filarsky. “We are now able to engineer genetically-modified parasites that deliver enormous quantities of gametocytes. We predict that these parasites will be useful not only for future basic research, but also for applied research in this area”.

The study results will be published on 16 March 2018 in Science. The study was conducted by researchers from the Department of Medical Parasitology and Infection Biology at Swiss TPH (an affiliated institute of the University of Basel), in collaboration with research teams from the Department of Molecular Biology at the Radboud University in the Netherlands and the Biozentrum at the University of Basel, Switzerland.

About malaria and its transmission

Malaria is an infectious disease caused by Plasmodium parasites. The parasites spread to people through the bites of infected female Anopheles mosquitoes. Malaria causes an enormous disease burden in tropical and sub-tropical countries, particularly in sub-Saharan Africa. According to the World Health Organization (WHO) around 210 million clinical malaria cases and more than 440,000 malaria-related deaths occurred in 2016 alone.

The gametocyte stage poses a major obstacle to malaria elimination and eradication efforts. Hundreds of millions of people in malaria-endemic countries have gametocytes circulating in their blood, many of whom do not develop malaria symptoms, and hence, do not receive drug treatment. In addition, gametocytes are not effectively killed by most of the currently available antimalarial drugs.

Centre of expertise in malaria

Swiss TPH is a world-leading institute in the field of malaria research and control, with more than 200 staff and students actively involved in addressing various aspects of the disease. Activities range from researching parasite biology, host-parasite interactions and host immunity, to developing, validating and applying novel drugs, vaccines and diagnostic tools, and to formulating new strategies for integrated intervention programmes to control and eliminate the disease. Swiss TPH also hosts a WHO Collaborating Centre for Modelling, Monitoring and Training for Malaria Control and Elimination.