Drug resistances are on the rise worldwide. Every year, around 700,000 people die due to antimicrobial drug resistance to bacteria, viruses, fungi and parasites. Without counter measures, experts estimate that by 2050, the annual death toll could increase to 10 million. In the frame of the Health Promotion and System Strengthening (HPSS) project, Swiss TPH and its partners organized a 2-day symposium in Dar es Salaam, Tanzania, to address this pressing public health issue. 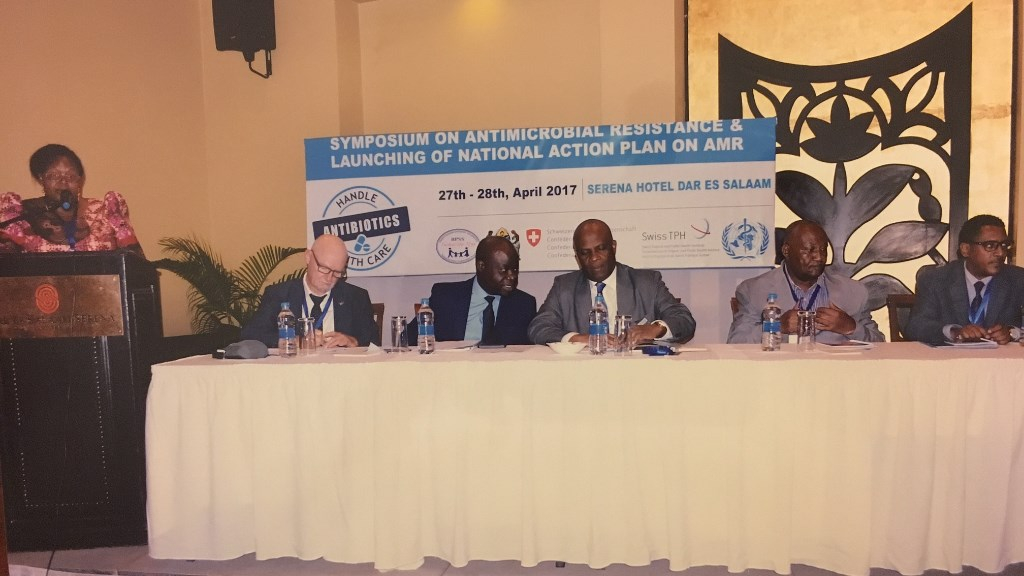 A threat to global health

Antimicrobial drug resistance (AMR) arises if micro-organisms such as bacteria or viruses survive exposure to a drug that would normally kill them. Strains that survive such exposure can then grow and spread, due to a lack of competition from other strains. The misuse and overuse of antimicrobials in people and animals is accelerating this process. This has led to the emergence of 'superbugs' such as drug-resistant tuberculosis bacteria, which are exceedingly difficult or impossible to treat with existing medicines. Antimicrobial-resistant microbes are found in people, animals, food and the environment (water, soil and air). They can spread between people and animals, and from person to person.

AMR has gained attention, acknowledging its development into a serious global public health concern. In 2015, the World Health Organization (WHO) urged the global community to act upon AMR worldwide, in particular also with regards to better surveillance, including data sharing and coordination. The United Nations General Assembly in 2016 called for accelerated global commitments and multi-sectoral efforts to combat antimicrobial resistance.

In Tanzania, only limited data exist on the issue of AMR. The HPSS project therefore recently conducted operational research to deepen the understanding of the use of antibiotics as well as knowledge, attitudes and practices in regard to antibiotics. The study found that antibiotics are often not rationally prescribed, dispensed and used. For instance, more than 60% of patients in primary health care received an antibiotic. Almost one third of all clients buying antibiotics in drug dispensing outlets did not have a prescription or saw a medical professional beforehand. One third of dispensaries reported that their clients buy antibiotics for animals to improve their growth.

From evidence to action

To address this issue, Swiss TPH, together with the Tanzanian Ministry of Health, Community Development, Gender, Elderly and Children (MoHCDGEC), the Swiss Agency for Development and Cooperation (SDC), WHO and HPSS, organized a 2-day symposium on 27 and 28 April in Dar es Salaam. The event aimed to raise awareness on AMR and translate evidence into policy and action. On the occasion of the symposium, the Tanzanian government also launched the national action plan (NAP) on antimicrobial resistance.

HPSS, which is funded by SDC and implemented by Swiss TPH and its partners, supports interventions in the areas of health promotion, health insurance, drug procurement and health technology maintenance. After a successful pilot phase in the Dodoma region, the project has been expanded to Morogoro and Shinyanga regions.

Swiss TPH is active in addressing AMR on many fronts from basic research on drug-resistant tuberculosis, to improving fever management in primary care facilities and to better understanding of interactions between human and animal health.